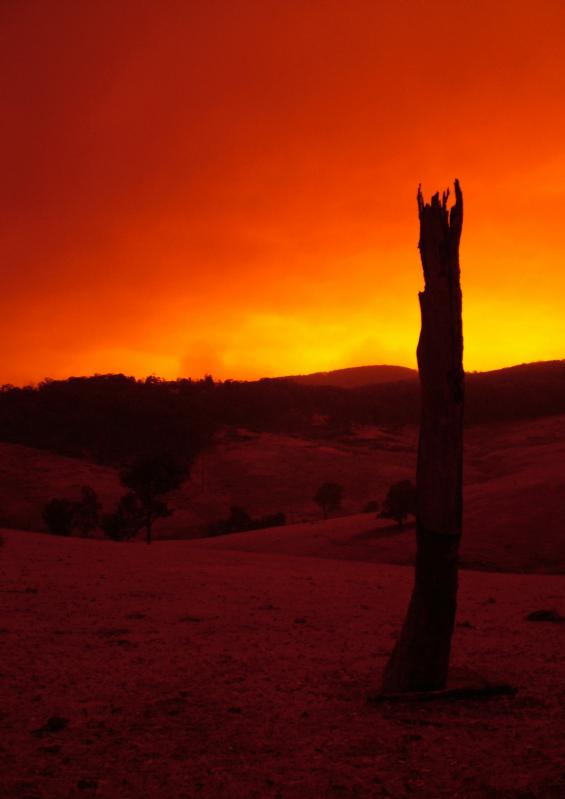 Context is everything in today’s wildland fire debate. This paper focuses much attention on the dry forest types in the Western United States—which means Ponderosa pine (Pinus ponderosa) and associated species. These forests are where many of our worst wildfires occur. I want to use these short-interval fire-adapted ecosystems to make some points about the relationship between their dynamics, our management of them, and the wildfire outcomes that we should expect. This paper suggests that understanding their dynamics can be a cornerstone for strategies to protect them…and us. I believe you may see similarities to forest types in Australia, but I want to leave it to you to draw those conclusions.

I am here as a visitor. I’ve had the good fortune to see the large fire problem from the field level, to the program level, to the policy level, but I am not here to lecture. Believe me, in the US, we are a long way from solving the high-consequence wildfire problem.

“Americans can always be counted on to do the right thing … after they have exhausted all other possibilities.”—Winston Churchill

Over five years ago, at a Bushfire CRC gathering in Canberra, the question was posed: Are big fires inevitable? Since then, big, catastrophic bushfires have plagued countries around the world. Just two years after the Canberra conference, the Black Saturday Fires (2009) tragically became the country’s worst civil disaster on record. They are among the most recent in a long string of ‘worst-ever’ bushfires.

Australia is not alone. The so-called ‘high-impact megafire phenomenon’ is a global problem.

Similar disasters in Greece (2007), Russia (2010), Israel (2010), Spain (2006), Portugal (2003 and 2005), Canada (2011), Mexico (2011) and elsewhere have shocked survivors and stunned those responsible for protection. In many cases, public outrage has reached the highest levels of government. All of these disasters have had deep, long-lasting social, economic and environmental impacts. People don’t soon forget them.

In the US—with perhaps the largest firefighting capacity anywhere in the world—over the last several years, ‘worst-on-record’ incidents seem to have multiplied and surpassed one another with a growing frequency. In Texas, last year’s (2011) wildfires were that state’s most costly ever. They persisted all year. In Arizona, the massive Rodeo–Chediski Fire (2002) was exceeded by the even larger, more destructive Bear Wallow Fire. In New Mexico, the Ponil Fire (2002) was surpassed by the Las Conchas Fire (2011) and was eclipsed again this year (2012) by the Whitewater–Baldy Fire. Colorado’s Hayman Fire (2002) burnt fewer homes than this year’s High Park Fire, but it devastated Denver’s watershed. The most recent Waldo Canyon Fire (2012) forced the evacuation of 32,000 people and resulted in the loss of some 350 homes, becoming Colorado’s worst wildfire on record.

Across federal lands in the US, suppression costs have reached nearly US$2 billion per year (2006, 2007 and 2008). While firefighting costs of any one wildfire can be staggering—$30 million to $40 million or more—they often represent only a small fraction of the total impact. Private property losses and natural resource damage can be five to ten times more.

Year-to-year impacts may wane somewhat, but the trends indicate that wildfires are burning hotter, getting larger, costing more, having greater impacts and claiming more lives. These incidents represent a clear defeat of our protection objectives.

But what if the high-impact megafire problem is not about how we fight fire? What if it is about how we manage the condition of fire-prone landscapes? In anticipation of deepening droughts, accumulating fuels and growing values at risk, there is little indication that what may have worked yesterday will work tomorrow. What is our plan to deal with future wildfire threats? It seems unlikely that we can simply ‘soldier on’ and be successful.

Most wildfire protection programs set out to ‘prevent the loss of life and property and, without compromise to firefighter safety, minimise natural resource losses and environmental damages at the least suppression cost.’ This is our protection objective.

Against this measure, when doing well most of the time—but not all of the time—is not good enough, the evidence indicates that we are not getting it done. Internal to the fire services, we have made tactical adjustments here and there, but—in a lot of places—we haven’t done much to adapt our wildfire protection strategies in a broader, more comprehensive way. We have been unable to balance fire programs and address the land use factors that may be setting the stage for catastrophic wildfire outcomes.

In the US, after countless reviews, reports, commissions and inquiries, for the most part we have failed to stem mounting costs, losses and damages. The fact is, for all the corrective actions bent on fixing operational failings, we have not had much of an effect on reducing the incidence of catastrophic wildfires.

Maybe we are working on the wrong problem and chasing the wrong solutions. Maybe we are overlooking the new realities that confront the fire services today. If we were to do a situational assessment at the program level, what would we see?

At the end of the day, there are simply more large fires that we cannot control. Among all of the catastrophic wildfires listed in the opening of this paper, all were ‘off the chart’; none abated until firefighters got relief in weather or benefited from a break in fuels.

These organisations do these things by design, not by chance or by happenstance. They have a strategic framework (social, political, economic, legal, ecological and institutional) anchored in maintaining safe, healthy, resilient fire-adapted ecosystems.

In his book Burning Bush, Stephen J Pyne (1991) describes DR Douglas’s lament in solving the wildfire problem. He said that there comes, first, an elaborateinquiry followed by an excellent report. On occasionssome legislative reform follows, typically addressingthe need for strengthening bushfire suppression. Thereis talk of mitigation. Funding flourishes for a few years,then withers away. As the years pass, there is a slow butsteady decline in the enthusiasm to mitigate bushfirerisks.

Meanwhile, the next disaster—in wait for the next drought—quietly incubates.

We need to get past asking: ‘how big does the tragedy have to be before our people and our governments take bold and meaningful actions?’ Maybe we cannot be so passive anymore. Maybe we have to help them do what we ask of our firefighters: get up on the ridge, reassess the situation, confront the realities around us, adapt our strategies, and lay out a new plan…a plan based on aligning bushfire protection strategies with land management strategies that are, in turn, grounded in fire regime dynamics.

We are watching a crisis in slow motion. It is a story where we have a terrible foreboding but, battling great myths and powerful misconceptions, we find ourselves being carried along in a script we neither want nor can live with.

We need a plan—a strategy—to deal with wildfires we presently cannot control—the ones occurring at the highest level of threat. The ones where people really count on us. If the fire services don’t pursue the development of this strategy, who will?

This is an edited extract of Jerry Williams’s keynote address to the AFAC and Bushfire CRC Annual Conference in Perth in August 2012. The full presentation, with a more detailed discussion, can be found at knowledgeweb.afac.com.au.