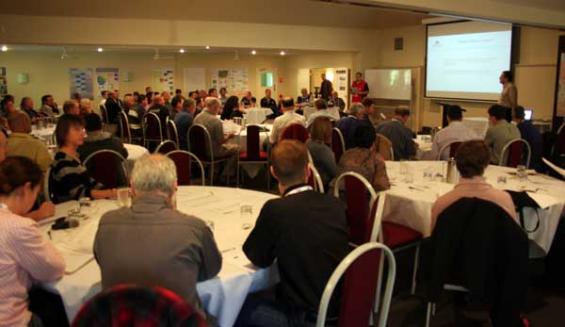 Following the Bushfire CRC and AFAC conference at Darling Harbour, 80 delegates left Sydney late on September 1 for the New South Wales Southern Highlands to attend the 2011 Fire Weather and Risk Workshop at the Peppers Craigieburn Resort at Bowral. This was a three-day meeting for professional fire managers, meteorologists and fire weather researchers. There was a strong presence from the Bureau of Meteorology, Geoscience Australia, CSIRO, the rural fire services, rural land management as well as the universities, the Bushfire CRC and the commercial sector. Organisers of the workshop were Bob Cechet of Geoscience Australia, Rick McRae of the ACT Emergency Services Agency and Graham Mills from the bureau.

At the previous Fire Weather workshop, many years before, tensions had come to the surface and the “operationals,” losing patience with the “theoreticals,” staged a walk-out on to the pleasant lawns of Craigieburn. This time, while there were brisk arguments, harmony prevailed and at the end of the workshop, all parties were happy. Indeed, there was general agreement about the need for a follow-up workshop in two years.

This is not to say that there were no differences. The most spirited discussions were about old methods versus new: How well has NextGen, the Graphical Forecast Editor, served us in its first years of operation? Do we have an effective metric for lightning strikes, dry and wet? Just what do we know, or need to know, about Foehn winds? And what does the future hold for bushfire research? 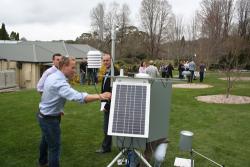 One of the most stimulating presentations came by way of the US Navy. What has the Navy to do with bushfires? Dr Mike Fromm, a meteorologist with the Naval Research Laboratory in Washington, explained that for a number of reasons the Navy has a particular concern about stratospheric aerosols, which may be produced in large quantities by forest fires. So the Navy is interested.

Mike Fromm is clearly an enthusiast for his subject, and has some intriguing questions. Why do some fires “blow up” while others, in apparently the same circumstances, remain relatively docile? Why do they blow up late in the day, rather than in the heat of noon? And most puzzlingly, why do big fires “pulse”? He showed spectacular graphics from the Big Desert (Victoria) fire of 2002, and from Black Saturday (Victoria) in 2009, and he came tantalisingly close to linking the vast pileus cloud caps tipped with ice, supported on a rushing pyrocumulonimbus column above the blaze, to the fire behaviour itself. It’s a chicken, he said, and an egg. The fires affect the clouds and the clouds, generating their own winds and weather, affect the fires.

Bushfire CRC research student Mika Peace (Bureau of Meteorology and University of Adelaide) brought the meeting down to earth with her description of the 2010 Layman-Ballan fire near Margaret River, Western Australia: A routine burn which behaved in a non-routine way. It was not so much the extra area burned that was the problem, she said, but the unexpected ferocity of the fire. It left three-quarters of the forest seriously scorched, led to questions in the state Parliament, and to a bill reaching $750,000 and counting.

What caused the blow-up? There was just a gentle breeze that day, said Mika, and it was quite cool. But otherwise harmless factors came together and created the disaster – sea breezes, convergence, vertical circulation and a pool of dry air high above.

It’s claimed, facetiously, that foehns make the Swiss bad-tempered when the hot dry wind comes off the mountains. But are foehns relevant to Australia? According to Dr Jason Sharples (ADFA at the University of NSW), hot dry winds mean bad fire weather, and foehns are extremely relevant in those parts of Australia where there are real highlands – the south coast of NSW, Gippsland, the Australian Alps, the Canberra region.

Dr Sharples’ work as part of the Bushfire CRC HighFire Project found that this is because of the extreme changes in temperature and humidity that can occur. Twelve degrees rise in an hour is quite normal during a foehn, says Jason. Unexpectedly, he says, the high country is normally much dryer than land below 1500 metres, and equally unexpectedly, the high country can be at its driest early on a summer morning. This foehn-related behaviour is of great significance to firefighters and anyone planning a hazard reduction burn.

A recurring issue at the workshop was the nature of fuel. How much moisture comes from a eucalypt canopy when it is fully engaged? How can a fire manager assess grassland? Grant Pearce of the New Zealand Crown Research Institute SCION described the latest of several projects concerned with grass curing in Australia and New Zealand. This is especially relevant to 2011's extended grasslands, such as those of the Monaro where African lovegrass poses a threat from Canberra to the Victorian border. Grass curing research is today a matter of satellite technology. There is still the need for on-ground validation, however, so the Bushfire CRC is engaged in defining standards. A real need, said Grant, is to produce accurate maps, not just of grass, but including practical reference points such as towns, rivers and roads. 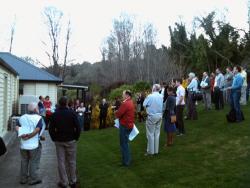 Grahame Douglas is Climate Change and Sustainability Coordinator for the New South Wales Rural Fire Service and a Bushfire CRC PhD student. He started his career as an environmental biologist before moving on to fire-related matters. Fire authorities are taking an increasing interest in environmental integrity, says Grahame, while the trends show increasing drought – and therefore increasing numbers of bushfires. There's more acceptance that fire is a part of the Australian landscape, he says, but we will certainly have to adapt to a changing world and a changing climate.

Communications manager of the Bushfire CRC David Bruce looked into the future of bushfire and fire weather research. The Bushfire CRC was originally funded until 2010, and then received additional funding to investigate issues arising from the Black Saturday fires, but only until 2013. Both the Australian Senate and the Victorian Bushfires Royal Commission have recommended that there be a continuation of bushfire research by some form of fire research institute.

Around 35 speakers gave presentations to the workshop.

This article appeared in the Spring 2011 edition of Fire Australia.