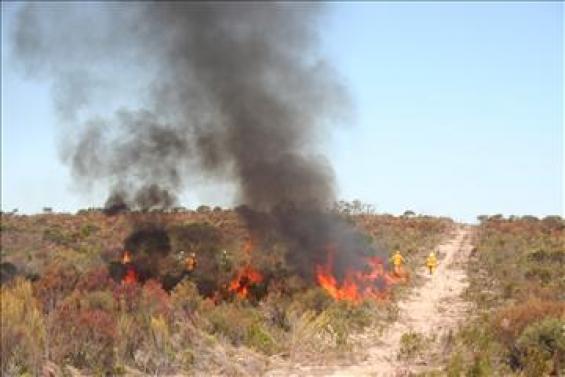 Many wildland firefighter deaths and injuries in Australia and overseas have resulted from firefighters being surprised and overtaken by a fast-moving fire - both on foot and in vehicles, in both grass and forest environments.

Unlike bats, whales and dolphins (which use sound waves to located objects in space) we humans cannot sense directly how far away an object is, although we mostly behave as if we can directly perceive distances. In fact, we have to (unconsciously and automatically) construct judgements of distance by making inferences that draw upon a combination of visual cues and past experiences.

In the natural world, humans see by means of light reflected off objects. This light enters our eyeball through the pupil at the front of our eye, passes through a focussing lens, and is projected onto the retina at the back of the eye. From there, nerve impulses travel to particular areas of the brain for processing to construct what becomes our picture of the world in view. Note that while the world we live in is three-dimensional, what is on our retina is a two-dimensional image. Our problem area of interest, speed and distance of a fire, is problematic precisely because we must use a two-dimensional image to construct a three-dimensional understanding of what is happening.

Underestimating How Fast a Fire is Travelling

There are two issues here. First, estimating the speed of advance of an approaching fire. Second, estimating the likely speed of forward spread of a fire, given the wind, fuel, and terrain slope conditions.

The task of estimating the speed of an approaching fire is extremely difficult. The reason for this is that we rely on the increase in size of retinal image to estimate speed of approach. While this is not inherently difficult with familiar objects that maintain a constant shape, such as oncoming motor vehicles when we cross a road, fires change their shape moment by moment and we are thus unable to make accurate judgements based on retinal image size change. The implication is that estimates of the speed of an approaching fire are likely to be very inaccurate.

In endeavouring to estimate the likely speed of forward spread of a fire given the wind, fuel, and terrain slope conditions, we face two challenges: (a) making accurate judgements about the degree of slope, fuel characteristics, and the wind speed and direction; and (b) making accurate predictions about fire behaviour based on these judgements.

Concerning (b), we can note the operation of a linear rate of change bias—humans (apparently) make predictions based on an assumed linear rate of change, whereas rates of forward spread of a fire may change exponentially (Note 1) with small changes in slope, fuel characteristics, and wind speed/direction.

Dr Mary Omodei and her research team have investigated (b) and found compelling evidence that experienced firefighters are vulnerable to a linear rate of change bias, and thus likely to underestimate speed of advance of a wildfire when slope increases. There does not seem to be evidence available about (a) —accuracies/inaccuracies in estimating terrain slope, fuel characteristics, and wind speed. However, anecdotal accounts suggest that firefighters pay attention to what could be called local “average” wind strength and may fail to give sufficient attention to the strength of wind gusts.

Overestimating Distance from a Fire 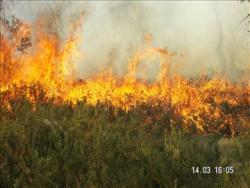 It is likely that distance estimates of fires in forest environments may be very inaccurate. While our primary cue is the size of the image of the object in question projected onto the retina at the back of our eyeball, the same sized image can be produced by a small object up close and by a large object a long way off. In the present discussion, a nearby fire with small flame heights can produce the same sized image on the retina as a fire which is further away but has larger flame heights.

It is thus quite possible for a relatively near fire with (currently) small flame heights to be misperceived as a fire with larger flame heights but further away. Given that small changes in wind, fuel characteristics, and slope may result in dramatic increases in fire intensity and activity, such an apparently simple over-estimation of distance from a fire can have serious consequences.

In their well-known paper The Dead-Man Zone, Cheyne, Gould and McCaw (2001) wrote that:

"We believe there is a common tendency to overestimate the distance to a fire when observing through the forest. On Project Vesta fires, it was nearly impossible to see the flames in a forest containing a 2 metre scrub layer and an intermediate tree layer when the fires were 100 metres distant, even when there was intermittent crowning in the overstorey. When flames were clearly visible, even experienced observers consistently overestimated the distance between the flames and some reference point such as the plot boundary, at times by more than 100%."

If their proposal is correct, presumably there are some processes by which simple inaccuracy in distance estimation is transformed into systematic overestimation (Note 2). There is no evidence available that unequivocally identifies such processes.

There are some effects known from laboratory research into visual perception that may be relevant, but it is uncertain how well they apply to the perception of fires in natural environments.

1. Interposition, Overlay, and Occlusion Effects: If an object is partly screened from view (occluded) by a second interposed, or overlaid object, then the occluded object is judged to be more distant than the occluding object. Distant objects are more likely to be occluded than near objects. This suggests that target objects which are occluded by many other objects are likely to be judged as being further away than are target objects occluded by few other objects. In forests, fires are likely to be occluded by a great many objects—trees and other vegetation. This may to lead to a fire being perceived to be further away than it is in reality.

2. Context, Foreground, and Background Effects: Laboratory studies show that size and distance estimates can be affected greatly by the context in which an object is viewed. Examples include Ponzo Illusions and Delboeuf Illusions. Context effects have been proposed to explain the so-called Moon Illusion: the moon is perceived (by most people) as being larger (by about three times) when it is near the horizon than when it is high in the sky. One suggestion is that when viewed over ‘filled’ visual space (near the horizon) the foreground provides visual cues that the moon is very far away and thus it is perceived as being larger. In relation to fires, the implication is that fires viewed over rich visual foregrounds (particularly likely in forest environments) may be judged as being further away than they are in reality.

3. Texture Effects: A cue to judging how far away is an object involves the amount of fine detail (texture) perceived. Generally, distant objects have little perceived texture, while near objects are more likely to reveal texture. In the case of fire, smoke haze is likely to obscure details about the fire and thus the fire may be judged to be more distant than it is in reality.

The above account of points 1 through 3 comes from the general field of the psychology and the physiology of visual perception At this time we have no evidence that they explain why wildfires might be perceived as being further away than they are in fact.

Factors other than simple visual perception need to be taken into account. Given that wildland firefighters almost always operate in crews or teams, social factors are likely to play an important role in dynamic risk assessments about likely fire danger (including predictions of both rate of advance of fires, and distance of fires). Such social factors are likely to include: (a) the perceived competence of the leader; (b) group cohesion; and (c) group norms about risk and danger.

There is abundant evidence that as individuals’ mental workloads increase their attentional resources available for additional or peripheral tasks, such as monitoring for threat, decrease. Fire crews in the field are mostly engaged in fire suppression-related tasks and may concentrate on these to the exclusion of monitoring the environment for signs of a deteriorating situation. This suggests the importance of having personnel on the fireground whose designated task is that of ‘lookout’ to be alert for early warning signs of a possibly deteriorating safety situation.

1. There is a need for systematic research to investigate and improve accuracy of judgements of speed and distance of fires in natural environments.

2. Emphasis should be given to the importance of deploying designated ‘lookouts’ on the fireground. Current guidelines for ‘lookouts’ should be reviewed for their usability. Detecting early warning signs of developing danger should be emphasised in wildfire safety training.

Note 1: “Exponential change” is change which occurs at an increasing or decreasing rate, rather than at a constant rate. That is, the change occurs more and more rapidly (or more and more slowly) over time.

Several people associated with the Bushfire CRC Program D: Safety and Volunteerism Projects in the School of Psychological Science at La Trobe University contributed to this paper.