Fire and weather— understanding the extremes 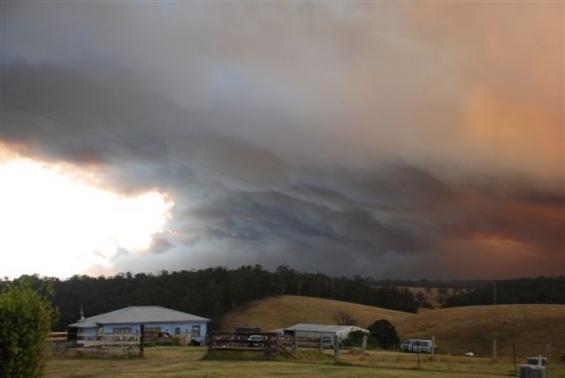 This article appeared in the Autumn 2013 edition of Fire Australia magazine.

Hot temperatures, high winds and low humidity are important factors in bushfire behaviour. Predicting these complex weather interactions is the goal of a Bushfire CRC project being led by the Bureau of Meteorology.

Destructive bushfires are synonymous with spotting. Embers, such as flaming pieces of bark, are carried on the wind ahead of the main fire, resulting in a fire travelling a long way in a short amount of time. This can potentially catch firefighters and the community off guard. But what sort of weather leads to this extreme and complex fire behaviour? Dr Jeff Kepert, Bushfire CRC project leader and Head of High Impact Weather at the Bureau of Meteorology, is leading this research.

Computer modelling has become an essential element of modern weather forecasting. In 2009, the Bureau of Meteorology upgraded to a new modelling system, the Australian Community Climate and Earth Simulation System (ACCESS). It has brought a large improvement in forecast performance.

As part of Bushfire CRC research, Dr Kepert and his team use ACCESS to help understand how bushfires interact with weather. This research mode uses extraordinary computer power to perform very high resolution simulations, with detail more than ten times finer than are used operationally.

“But it takes a lot of computer time,” noted Dr Kepert. “A one-hour simulation will take the computer two hours to process.”

“But what it does is let us drill down and really see fine details of what is happening in the atmosphere. As a result, we can better understand how these fine-scale features may interact with bushfires and how this may affect the spread and intensity of bushfires.”

A particular focus of the research simulations is spotting and ember transport. The team has been running simulations of the weather experienced in Victoria on Black Saturday in 2009 to understand conditions experienced, and to see just how far ahead of the main fire front spotting may occur.

The research shows these updrafts are a key factor in extreme and complex fire behaviour.

“An updraft is buoyant hot air, which is caused by a number of things. The first is the fire itself. The smoke column from a fire is hot, and therefore ascends,” explained Dr Kepert.

Anyone who has sat around a campfire would have seen embers suspended on a small scale.

"Our simulation shows that in extreme conditions, the updraft above a large fire exceeds 70 kilometres per hour. This is enough to lift and suspend quite large embers.

“But an updraft caused by a smoke plume weakens  with height, especially on windy days. It can become very erratic.”

The research indicates that smoke plumes may be unlikely to be able to transport embers long distances in isolation. Spotting in the tens of kilometres requires more than a smoke plume. Its interactions with atmospheric features are important. One of these factors is roll vortices.

Dr Kepert explained. “To understand what a roll vortex is, imagine standing with your back to the wind, looking downwind. If you could see roll vortices, what you would see is pairs of counter-rotating rolls, a little bit like endless pairs of egg beaters, one after the other, alternating between rotating clockwise and anticlockwise.”

Between each pair of rolls is either an updraft or a downdraft. Dr Kepert noted that the simulations of Black Saturday showed the lowest four kilometres of the atmosphere was filled with roll vortices, with the associated updrafts peaking at speeds of 20 kilometres per hour, enough to suspend embers such as large pieces of bark. The updrafts are relatively narrow, whereas the downdrafts are broad.

“This means the updrafts really concentrate the air and can support the embers as they are carried downwind,” said Dr Kepert. “The simulations also show these updrafts are weaker closer to the ground. As a result, we don’t think the roll updrafts can lift embers by themselves—there is an interaction between the smoke plume, which lifts the embers up to a height of a kilometre or so, and then the roll vortices manage to suspend the embers further, contributing to the long-range spotting.”

A wind change is a crucial time in fighting a fire. Eye-witnesses often talk about very intense spotting when a wind change occurs. The research has also simulated this.

“Wind changes—cold fronts and sea breezes, meteorologists have known for a long time that right at the head of the wind change there is a narrow region of strong updraft. What isn’t understood is whether this updraft has a role in promoting spotting during a wind change. But we suspect that it does—on Black Saturday, the Beechworth–Mudgegonga fire produced an intense burst of spotting that threatened the nearby town of Myrtleford, a few kilometres away. This happened near midnight, when the fire would normally be less active. It seems that the wind change impacting the fire was responsible.”

The research is investigating these factors. Results to date show the updraft on the wind change is strong enough to suspend embers, so it is believed that in conjunction with the fire plume, it may result in an increase in spotting. But more research is needed to completely understand how this occurs, and why.

The aim of the research is to help predict which bushfires are most likely to produce significant spotting, and when. As understanding of the physical mechanisms that lead to spotting increases, the ability to be able to predict it better will increase.

“With this knowledge, fire agencies will be better able to warn communities. It will also assist fire agencies to be quick off the mark and onto the scene when a spot fire occurs, to get on top of it before it becomes too large to manage.”

There is still a long way to go. “To predict things explicitly, we are still some years away,” said Dr Kepert.

“But through running these very high resolution research models, we are able to take knowledge and understanding to coarser resolution models that we can run in real-time, on a day-to-day basis. We can interpret what we are seeing with the current operational speeds in light of what we know from the high resolution, and make useful predictions.”

Research such as this, along with more powerful computers and increases in satellite technology, have led to improved weather forecasts in recent years. Compared to Ash Wednesday in 1983, weather forecasts can now provide the community and emergency services with more accurate warnings of extreme weather, much earlier.

The research undertaken by Dr Kepert and his team is part of a collaborative Bushfire CRC project Risk Assessment and Decision Making, incorporating researchers from Geoscience Australia, CSIRO, the University of Melbourne and the Bureau of Meteorology (featured in Fire Australia Summer 2011–12).

The project has developed a prototype model that shows the future path of a fire, showing which towns, buildings and infrastructure could be affected. This tool, when operational, will give people managing fires the information they need to make safe, effective and efficient decisions.