Fire Science at the Extremes 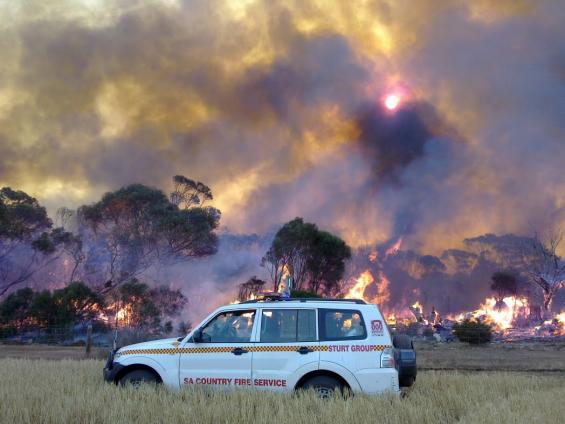 This article was published in the Autumn 2014 edition of Fire Australia magazine.

Devastating bushfire events over the past decade have had a huge impact on the Australian community and environment. In order to mitigate against the impact of these events, information is critical. Fire managers need to know where a fire will burn, what fuels it will consume, how it will behave, what assets are at risk and where the smoke plume will go.

Predicting these factors is extremely complicated. But as with many predictive questions, mathematical numerical simulations can provide answers. To discuss how, experts in weather, fire and computer modelling from around the world converged to discuss the latest research.

Conference
The 2nd International Congress on Modelling and Simulation (MODSIM 2013) took place over six days. Being one of the biggest conferences of its type in the world meant that there were 12 conference streams covering 81 separate sessions, with more than 800 individual presentations. Highly diverse streams ranged from modelling of bushfire dynamics, fire weather, impact and risk, to biological systems, economics and finance, energy and water resources.

Fire prediction received a frontline introduction at the conference plenary, given by the Bureau of Meteorology’s Dr Jeff Kepert. Dr Kepert discussed ‘The science and technology of forecasting severe weather’, by comparing the fire weather forecasts for Ash Wednesday in 1983 and Black Saturday in 2009. The presentation highlighted the substantial advances in simulation and modelling in the intervening decades.

This plenary led into the main fire session, which showcased recent advances in fire simulation and modelling. A broad range of fire science was covered in the session, including fuels, climatology, fire-spread simulation and extreme fire behaviour.

“A large proportion of the fire research came from Bushfire CRC researchers. This shows the significant contribution to new fire modelling knowledge from the work of the Bushfire CRC,” said Mr Wouters.

“It was good to see the different ways in which fire modelling is being applied across Australia and New Zealand, in both the research and fire agency spaces. In particular, the application of Bushfire CRC work, both the Phoenix RapidFire and Australis/Aurora models, is now being taken up by agencies and universities in several states and used for a range of planning and experimental applications,” he said.

The range of simulation models was a conference feature, with the Weather and Research Forecasting and the Bureau of Meteorology’s Australian Community Climate and Earth Simulation System (ACCESS) featuring strongly. All models have enabled advances and discoveries in the field, demonstrating how rapidly fire modelling has evolved over the past few years. Each simulation highlighted the difficulty in establishing a relationship between wind speed and the rate of spread of a fire front. This is a real challenge for the future.

Fire Decision Support Tool
The Bushfire CRC’s Fire Impact and Risk Evaluation Decision Support Tool (FireDST, featured in Fire Australia Summer 2011–12, p. 14–16) group was a key conference contributor, represented particularly by researchers from the Bureau of Meteorology and Geoscience Australia. The FireDST group gave several presentations. There were notable emphases on visualisation, mapping, hazards (including smoke) and graphical products, with a focus on communication to stakeholders and the community. A key difference with the FireDST project is that it reflects a more recent trend towards mapping fire-spread as the chances of fire affecting a given area, rather than a more blackand- white approach.

Meteorology
Recent meteorological fire research by Bushfire CRC researchers featured strongly. The research examined high-resolution atmospheric simulations for several bushfires. Running these models with resolution at scales of hundreds of metres has only been recently possible due to increases in computer power. These high-resolution simulations afford researchers new insights into the ways in which mesoscale and microscale meteorology has the potential to influence fire behaviour.

Mike Wouters confirmed the significance of this work. “The work of Bushfire CRC researchers in the meteorology field in analysing past events and developing improved prediction and forecast capabilities is important. This work is providing some insightful lessons for fire managers,” he said.

The findings from the recent research in this area present a new challenge for operations—what are the appropriate meteorological inputs to assist fire management and mitigation decisions? The findings from high-resolution atmospheric models, coupled with fire–atmosphere models, have provided detailed new knowledge on how the atmosphere influences fires and how fires and the atmosphere interact. This raises challenges for anticipating how a fire will evolve and therefore behave.

Pyro-convection (the process by which energy released by a fire produces deep vertical columns of smoke and cloud) was an emerging topic, and looks likely to be an active research area in coming years. The extreme case of pyro-convection is fire-generated thunderstorms. This process was mentioned in contributions from case studies, idealised and real simulations and predictive capacity. Talks were presented on the structure of fire plumes, their likely vertical development and extent as well as atmospheric structure and interactions with topography.

Studying past fires in depth
An important learning opportunity was the examination of past fire events in detail. Case studies included the Dunalley bushfire (Tasmania 2013), Margaret River bushfire (Western Australia 2011), Canberra’s 2003 fires, and fires from New Zealand and France. The French fire provided an interesting contrast to the large fires described in the Australian case studies, as the fire burnt an extremely small area, but was located at the interface of native vegetation and a residential area. The extremely complex terrain, and a combination of other factors, created a highly significant event.

Climate
Climate change and climatology studies featured in several presentations. Some fire-related climatology studies examined the influence of jurisdiction on research focus. The approach was often state-based, rather than national, similar to the focus in fuel studies. A study describing the climatology of lightning strikes highlighted a research area relevant to fire ignitions.

Bringing it all together
MODSIM 2013 showcased the progressive work happening right now in fire science. The increase in the number and range of presentations from the previous conference is very positive. However, the complexity and range of specialist areas that lie within bushfire modelling highlights a challenge for the progress of fire science—how do we integrate the research being undertaken in related fields? Much of the research is undertaken independently, so opportunities such as MODSIM promote sharing thoughts and ideas. As with many other areas of science, integrating the various components through interaction and collaboration is critical to advance the field.

Overall, MODSIM 2013 was a positive week, full of interactions and a supportive research environment. There are many opportunities for collaboration and ongoing work into the future. The challenge for all of us in the field will be to further develop our collaborations to progress fire and weather modelling, enabling transition from research to operations.

Mika Peace is a meteorologist at the Bureau of Meteorology and is completing a PhD in coupled fire–atmosphere modelling through the Bushfire CRC.