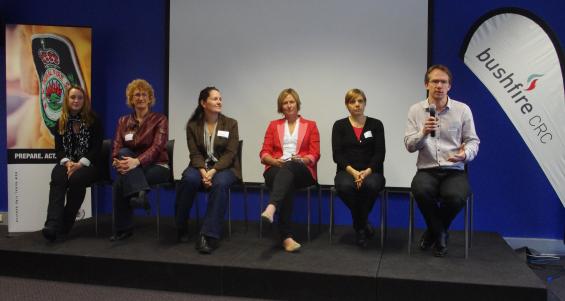 Featured at this forum were updates on around half the current research programs.

The Operational readiness in rural firefighters during bushfire suppression project explained that the simulation test had been validated with the assistance of the fire industry. The next stage is to run the test on up to 200 firefighters. However, more volunteers are required for the simulation to be a success.

The Operational readiness of rural firefighters – air toxins project discussed the emissions rates of various types of products, as well as dispersion models based on the scale, material, emission type and wind speed. The next step is to develop a set of scenarios and compare modelled exposure concentrations to previously measured exposures at structural fires.

The Firefighter health and safety - beyond endurance sustaining operations project discussed the risk of fatigue-related incidents during shift work. The study looks at five different shift types from a six hour shift through to a 12 hour night shift. The aim is to develop a model to estimate fatigue risk under different operational constraints.

The Effective communication - communities and bushfire project presented findings from interviews with residents of an urban/rural interface area in Tasmania. A toolkit to assist residents prepare for bushfire, to be distributed by local government, has been developed.

The Extreme fire behaviour project detailed the work to date in determining the potential for a bushfire to start, the potential for a bushfire to develop beyond initial first attack, and once a fire starts spotting, when these spot fires will be beyond initial attack. The study of the weather on Black Saturday was also examined, along with a simulation of a fire plume model. Future work will assess the interaction between the weather model and fire plume model.

The Environmental impacts of prescribed and wildfire - emissions management project explained a method of estimating carbon loss in a forest with 90% accuracy has been developed. Fuel load estimates will be calibrated with the current findings to gain a better estimation of carbon emission.

The Fires and hydrology of south eastern Australian mixed-species forests project is examining water use of bushfire affected mixed species eucalypt forests. Data has been collected and analysis is now underway.

The Quantifying water quality risks following wildfire project explained the progress made to date in understanding the risk of mass-erosion post bushfire. The next steps include completing the Black Saturday air photo analysis, continuing to measure instrumented research catchments and developing a plan for outputs with end users.

The Economics and future scenarios project explained the current focus on scenario development to develop a repeatable framework for exploring the relationship between management intensity and asset quality. Progress has also been made on extending the review of economics applied to bushfire.

The Social construct of fuels in the interface project explained that data from houses both affected and unaffected by fire is being analysed, including aerial images, the slope, elevation and topographic position, the age of the surrounding fuel and fuel type and information on house construction.

Feedback indicates that the forum was valuable for both presenters and attendees; presenters able to gain feedback and discuss research direction with end users, while attendees valued the chance to hear a progress report on each project and discuss how the research can be used by their organisation.

The Bushfire CRC holds the forum every six months to review the progress of ongoing projects. Researchers, PhD students and lead end users are given the opportunity to present an update of their activities and invite discussion from across the members of the Bushfire CRC. Presentations from each project are available on the Research Advisory Forum 7 page.